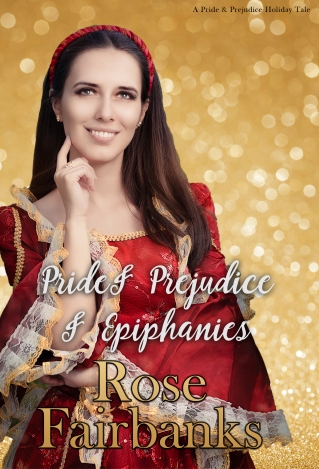 Darcy entered the rented stagecoach and sighed. Across from him, Mr. Gardiner smiled.

“Incredibly,” Darcy answered. “I know you might think I should have pushed for this years ago, but devotion to my father’s memory made it impossible.”

Mr. Gardiner shook his head and held up his hands. “No, no. I do not pass judgment on the situation. I think perhaps I saw it with more clarity, but surely even your father would have washed his hands of Wickham after everything.”

“If Father had been alive, a great number of these things never would have happened.”

“You cannot know that,” Gardiner insisted. “If the events of this season have not made that clear to you, then perhaps nothing will.”

Darcy grew quiet. He had not thought Wickham destined to become a murderous madman. Darcy had long believed that if his father had lived, many events would have happened differently. However, he never would have met Elizabeth. That was an alternate reality he did not wish to consider. All the headache and heartache with his nemesis was worth the joy he felt with her.

“Perhaps things may have been different with Father alive,” Darcy said slowly, “but that does not mean they would have been better.” The years that his father was alive and yet blind to the perfidy of Wickham’s ways had been inexpressibly painful to Darcy.

Gardiner peered at him.

“I was checking for grey at your temples,” he laughed. “For such a young man, you speak with wisdom!”

Darcy chuckled. He genuinely liked Mr. Gardiner and his wife. They had both been easy to talk with. They were neither vulgar nor conceited. He had invited them to Pemberley next Christmas. Mrs. Gardiner added the notion of touring Pemberley wrapped in snow. Elizabeth’s eyes lit with joy as she listened to Darcy talk about the sleigh rides and snowball fights of his youth.

Longing tugged at his heart. It would make for a very long day, but they were now on their return trip to Meryton. Having lived through the pain of separation from Elizabeth for a month and then the havoc of recent events, he wished never to leave her side again. When he arrived at Longbourn that evening, he hoped she would consent to a speedy wedding. Grinning, Darcy did not think the other prospective bridegrooms would dislike the notion of a triple wedding.

When not woolgathering about his beloved, Darcy and Gardiner spoke of fishing and hunting. Darcy learned Gardiner had enough income to purchase an estate, like Bingley’s father had amassed, but he did not wish to give up the day-to-day control of his enterprise. He enjoyed the work, and Darcy respected him all the more for it. Most landed gentlemen became useless wastes and raised just as terrible children. George Darcy had worked hard to keep his children from becoming such, although with influences from his aunt, Lady Catherine de Bourgh, it was not easy.

Mr. Gardiner must have sensed the direction of Darcy’s thoughts, for his next question was about the very lady. “I understand your aunt has an estate in Kent. She is the patroness of my brother-in-law’s heir.”

“Yes, such a strange set of connections. He is to marry Elizabeth’s friend. It seems that even if I had not returned to Netherfield, I would see Elizabeth again at Easter.”

Gardiner grinned. “Love conquers all, then!”

“I am happy to hear you agree. My wife and I have worried the most for Elizabeth’s attachment to you. All the engagements are unexpected to us—you can understand why. However, your situation in life is far different than Elizabeth’s.”

“I believe she is up to the task,” Darcy said. He chose to tread carefully. He did not wish to insult the Gardiners or Bennets and agree too readily, but neither could he lie and say it was not a concern.

“As long as she knows what is being asked of her.”

Darcy shrugged. “Some may view her with contempt. That would be the case no matter how I married. Some might believe her beneath me. On the other hand, if I married a title, many would say that was above me. Unfortunately, people feel they have the right to judge my life.”

“You understand that Elizabeth can be a tad sensitive to judgment and feelings of inadequacy.”

“Respectfully, sir,” Darcy said with a solemn voice, “I believe I have seen her in the company of those who disapprove of her more often than you have. Mr. Bingley’s sisters, while not very important in society, hold similar opinions to them. Elizabeth ran circles around their intelligence. Miss Bingley never knew if Elizabeth mocked her or was being civil. It was entertaining to watch, and she was nothing short of magnificent.”

“Indeed?” Gardiner laughed. “I am pleased to hear it.”

“I understand I uttered words before our acquaintance began which wounded her. I know she, quite justifiably, did not spare any grace when she reported my deficiencies far and wide. I suspect you and your wife received such information?”

“Yes,” Gardiner agreed. Sitting back, he folded his hands over his belly. “I do not doubt her attachment to you. Even at the time of her letter, it seemed as though she was oversensitive because she cared for your opinion despite her words.”

“Ah,” Darcy said. They had got to the heart of the matter. “And you want to be sure I understand that she values my opinion.”

Gardiner nodded. It had not entirely occurred to Darcy before. He had been so desperate for her good opinion, once he realised he did not have it, that he never considered she felt equally desperate for his.

“Let me tell you why I am the perfect husband for Miss Elizabeth,” Darcy said and leaned forward. “No man could love her as I do. No other man needs her as I do. They might see her beauty and enjoy her wit, but they do not need to hear her laughter like a drowning man needs air. They do not need to see her eyes light up in amusement. They are not fascinated with the pitch of her voice, the flip of her hair, the movement of her hands. They do not see her as a glowing light which, while I admit I desperately want to light my own, can be snuffed out with selfishness.”

Darcy shook his head. “A few weeks ago, I would have argued I could offer Elizabeth the world. I would have enumerated what she could gain by marriage to me or vow to keep her safe. In my heart of hearts, I would have acknowledged that I wanted to capture her essence, for it brought me comfort. Now, I only know that I have the good fortune of her esteem, and I will never let it go. Now, I know that it is not enough to be two independent, strong-willed people, but that together, we can defeat anything. Now, I know that to love a person means to encourage them to grow. That by adding to their strength, my happiness is intensified. I never knew such selflessness could be so rewarded.”

Mr. Gardiner said nothing, but his smile was answer enough. When Darcy reached Longbourn, he requested a walk with Elizabeth. The cold air made their breaths puff out like billows of chimney smoke. He wrapped his arm around her tightly as he whispered in her ear his love and devotion to her. In between stolen kisses, they planned their wedding and the dreams they hoped to achieve in their marriage. Fortunately, when they returned to the house, no one commented on the contrast between their breathless state of overheated cheeks and the coldness of the outside air.