Zoe is a great friend and I had the wonderful honor to be one of her beta readers for Promises Kept. The love between Fitzwilliam Darcy and Elizabeth Bennet is so sweet. Strong and tender in all the right places. The perfect read for when you need the perfect man in your life- as those only exist in books! (Sorry hubby, love you but you’re not perfect.) It just hits so many good spots!

Promises Kept is the sequel to I Promise To… and showcases Elizabeth and Fitzwilliam’s first year of marriage- things unseen in the novella- but also works as a stand alone read. 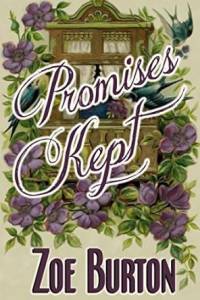 This ‘Pride and Prejudice’ novel variation follows Fitzwilliam and Elizabeth Darcy through the first year of their marriage. Arranged by his father in the I Promise To… novella, their union saved Elizabeth from a persistent, abusive suitor. The couple has known each other for years and quickly come to realize their love for each other. However, not everyone is happy with the marriage, and trouble comes quickly upon them. Dealing with jealous ladies and scornful gentlemen in London as well as illness and injury at Pemberley, they grow together as a couple while Elizabeth regains the confidence she has lost.

“Fitzwilliam, I need to ride out to visit Mr Barton today. Wickham has told me the roof of their house is leaking. I wish to see the damage myself and ensure we get everything repaired. I would not put it past Barton to fail to report something, so as not to be a bother to anyone. Far too self-effacing, that one. Would not do for him to try to make those repairs with his own funds, not with four children to raise.”

“You are correct. It would not do. I do not understand such behaviour. Surely he would rather not use his own money to repair a home he does not own?”

“One would think not; however, he has done so in the past. I recall his father being a harsh man, always chastising his wife and children for being an impediment to him. He was not happy with his life, I think. Perhaps that is why his son is this way. At any rate, would you ride with me? I should like to get your opinion of the matter.”

From the bedroom attached to the sitting room they were in, the gentlemen heard a series of harsh coughs. They looked at the door, then back to each other.

“If you do not mind, Father, I would much rather stay here and tend to Elizabeth. She woke in the night with that terrible cough and a sniffling nose. I am concerned about her.”

“I had not realized she was ill! Certainly you should stay with her,” Mr Darcy replied. “Does she need the doctor? I can send him a note when I go downstairs.”

“She does not show signs of a fever yet. I would prefer waiting until that happens. You know how she can be if she feels she is being fussed over unnecessarily.” Fitzwilliam rolled his eyes as his father chuckled.

“Indeed I do.” He slapped his hands on his knees as he rose, adding, “Well, then, I will leave you to comfort and coddle your wife. But promise me that if she begins to get fevered, you will send for the physician.”

Fitzwilliam had risen along with his parent. “I promise. I will see you upon your return. Please be careful.”

Waving his son’s concerns away, Mr Darcy headed down the grand staircase and out the door to mount his waiting horse for the ride to the Barton farm.

He had not been gone an hour when the wind began to pick up and a light rain to fall. By the time he had thoroughly inspected the tenant house, spoken with both Mr and Mrs Barton, admired the children, and consulted with Mr Wickham to give specific instructions as to repairs, the rain was coming down in sheets. Turning down an offer to wait out the storm with the Bartons, citing the closeness of Pemberley House to their own, he mounted once again and began the trek back. Moving more slowly than he had earlier, due to the reduced visibility caused by the weather, he turned his collar up in hopes of preventing any more rain from sliding down inside his coat. Suddenly, what had been a simple downpour became much more dangerous.

Darcy heard the thunder rolling in seconds before he saw the lightning. His horse moved uneasily beneath him, and every ounce of focus and skill he had was required to keep the animal under control. When the next blast of thunder sounded loudly in his ears followed by an even closer crack of lightning, the horse began to rear. Darcy fought to regain the upper hand, but when it began to buck, he lost his seat, landing on his back with a thud, his head slamming into the hard-packed earth of the path.

Out of breath and woozy, he laid on the ground for a few minutes, rain soaking and pooling around him. After a few minutes, he tried to rise. Pain in his leg and head stopped him, and he lay back down in the hopes it would recede once again. Next he tried to peer through the storm to locate his horse, but was unsuccessful. Hopefully, the silly thing returned to the stables, he thought. That one will need some additional training.

He attempted to move once or twice more before giving up. He knew an alarm would be raised if his horse appeared without him. Even if it remained nearby, when he failed to come to supper, Fitzwilliam would know something was wrong. He’s a good boy. I am so glad he did not fight me about Elizabeth. She was just what he needed. Darcy’s thoughts continued on until, exhausted and in pain, his unconscious took over and allowed his mind to rest.

At the house, his son was trying to entice his wife to take some tea laced with honey, for her throat. She had not eaten much that day, and Fitzwilliam was anxious that she take some nourishment, even if it was of the liquid variety. He had begun to threaten her with honey-laced Scottish whiskey if she did not take the tea. Stubborn woman that she was, Elizabeth argued with him, which, of course, made her throat hurt worse.

“Sweetheart, did you not just recently chastise Georgiana for being so impatient for her lessons to be complete so she could attend our picnic? And did you not tell her that the quicker she worked, the sooner she could play?” At her nod and before she could begin to speak, he continued, “Do you not see the similarity in your situations? The quicker you drink this tea, the sooner I will stop fussing at you about it and threatening you with stronger remedies.” He hid a smirk at the roll of her eyes and twitch of her head. “Drink this tea, my love, and I shall leave you be about it for a few hours.”

With a loud sigh, followed by another harsh bout of coughing, Elizabeth drank the tea. It did feel good on her throat, though she was not about to tell her husband that. He was correct entirely too often; she must do her best to ensure his understanding that this was not allowed. She opened her mouth to say so when a knock came upon the dressing room door.

Entering at Fitzwilliam’s bidding was his valet. “Pardon me, sir. I have an urgent message for you.” He threw a quick glance at the mistress, telling his master without words that it was serious and that perhaps she did not need to hear.

Turning to his wife, Fitzwilliam stroked her face, saying, “Let me go listen to what Smith has to say. I shall return shortly.” He leaned to her, giving her a quick kiss on the forehead, then stood and left the room, gesturing for his valet to follow him. Upon gaining his dressing room and shutting the door behind them, he asked, “What is it?”

“Sir, word has just come from the stables. Your father’s horse has returned, without him. Mr Wickham has been notified, and search parties are being organized. Wickham felt you would wish to take part. I was not as certain, knowing Mrs Darcy to be ill, but I promised to tell you straight away.”

Zoe is giving away one ebook copy! Please comment below before 11:59 pm EST August 28th to be entered.

Zoe Burton first fell in love with Jane Austen in 2010, after seeing the 2005 version of Pride and Prejudice on television. While making her purchases of Miss Austen’s novels, she discovered Jane Austen Fan Fiction; soon after that she discovered websites full of JAFF. Her life has never been the same. She began writing her own stories when she ran out of new ones to read.

Zoe lives in the snow-belt of Ohio. She is a Special Education Teacher in an online school, and has a passion for romance in general—Pride and Prejudice in particular, and NASCAR