One of the things I love most about JAFF is that we have the freedom to imagine Darcy’s thoughts and feelings on situations. In Sufficient Encouragement, I frequently split a scene in half so you get both Elizabeth and Darcy’s perception of incidents. Here are two excerpts from Chapter Two as Jane and Elizabeth are leaving Netherfield to return to Longbourn.

After a few more awkward and disjointed but adorable remarks between Jane and Bingley, he handed her in. Elizabeth stepped forward and was surprised to feel the warmth of a hand take hers. She nearly gasped when she realised the gentleman was not wearing gloves.

Looking down, she saw a bare, strong, masculine hand hold her own ungloved one. The owner’s thumb lightly stroked across the top of her hand and gave a gentle squeeze. She glanced up in bewilderment and saw the very proper Mr. Darcy attached to the hand that still held her own, and his pale blue eyes seemed to pierce her.

He immediately released her hand, quickly turned, and walked away. He did not even glance at the carriage as it drove away. Elizabeth hated to admit how much his gallantry affected her sensibilities. She had never had a suitor, no man to bow over her bare hand in her home before. If not for the ink spilling on her only pair of gloves, her hands would have been covered. What must he think of her for breaking propriety so much? And why was her heart thumping so wildly in her breast? And what was that look Mr. Darcy gave her? 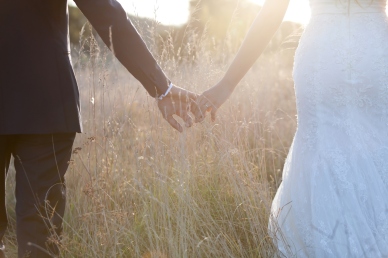 A faint scent of lavender alerted him to Elizabeth’s presence. He barely managed to bid her farewell. Suddenly, his body was moving on its own. His mind still reprimanding itself for not speaking more to Elizabeth, it barely registered that she was about to enter the carriage. He stepped in front of Bingley and handed her in.

A thrill coursed through his body when their hands met. Her skin was so soft that he could not resist the temptation to stroke it with his thumb. He gave her delicate hand a squeeze. If he were more aware, his mind would have been filled with questions, not the least of which would have been, why did she not rip her hand from his? Instead, she lifted her face, and her beguiling eyes met his in wonder.

In a flash, he felt how much he truly desired the young lady before him. Slowly, his mind registered that she was pulling her lean fingers from his hand. He released her hand and quickly walked back into the house, wondering how so much of his life seemed to pass before him in just one instant. How could so much of his life now seem centered in the feeling of her hand in his? As innocent as it was, he ached to hold her hand again, to cradle it, to stroke every inch, to tenderly kiss each lovely finger. His hand reacted in response to his thoughts.

Once safely in the library, momentarily away from even Miss Bingley’s cloying remarks and Bingley’s sadness, he allowed himself to ponder what on earth had just happened.

Darcy paced. He had always been careful not to raise the hopes and expectations of any of the ladies of his acquaintance. Not that it stopped most from having hopes. But there had been occasions when he had been prompted by a forward lady or two to touch a bare hand. Any doubts he may have had about his attraction to Elizabeth Bennet died even as his body came alive in a way he had never known.

His reason told him it was mere attraction, infatuation, perhaps lust and carnal desire — and nothing more — that caused his reaction. His will determined that it could withstand the temptation of Elizabeth Bennet for a few more days. He would soon return to Town — far, far away from her—and be lost in his worries once again.

There were beautiful ladies of the ton. There were witty, intelligent, kind, and accomplished ladies by the dozen, or so he had been told. True, he was fastidious, and he refused to bend on that, but surely Elizabeth Bennet was not the only woman who could fit his definition of perfection.

Perfection? When had he determined she was the lady most suited to him?

No, that thought would not do. She could not be the only woman whose touch ignited his dormant passion.

Passion? When had he determined his feelings were so passionate?

He was never passionate, and yet it was difficult to ignore his body’s impulse to rush after her and take her in his arms. He would kiss her lips mercilessly until she could tease him no longer. And then he would…

He shook his head. Nothing but carnal desire, certainly. He would not be a slave to such feelings. Other suitable ladies existed, he reasoned. He was only too busy before to notice these other women, to make their acquaintance. There was no such thing as destiny. And if there were, he could not afford it.

Surely there must be ten ladies who may stand in even better light than Elizabeth Bennet!

Just to firm his resolve and not at all because he was fleeing from the lady, his next thought was London. I must leave immediately for London.

His solitude was, welcomingly, broken by Bingley.

Darcy’s got it bad! Here’s the book synopsis. 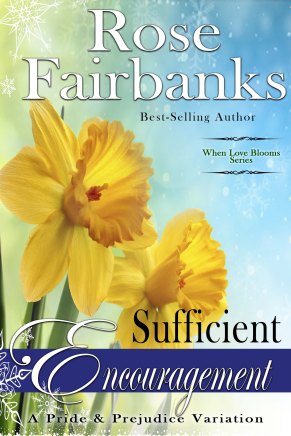 We are all fools in love…

Some say a lady’s imagination is very rapid. Such is the case when Elizabeth Bennet overhears that Mr. Fitzwilliam Darcy admires her eyes. She thinks nothing for herself, but immediately considers her dearest sister’s growing attachment to Mr. Darcy’s friend. If Elizabeth spurns such a wealthy — and proud — gentleman, he might do everything in his power to separate his friend from her sister.

Raised in a world of expectations and pedigree, Darcy knows Elizabeth Bennet can offer him nothing of material value. As his attraction for her grows, he becomes increasingly convinced his feelings are nonsensical. Still, he might forsake it all if only he had true encouragement.

Misunderstandings lead to betrayals and the couple soon learns falling in love takes courage but staying in love requires forgiveness. Traversing from the groves of Hertfordshire to the drawing rooms of London to the complexity and danger of Luddite revolts in Yorkshire, Sufficient Encouragement follows Darcy and Elizabeth’s journey of love and forgiveness.

*This story contains a scene of nonexplicit sexual violence.

Sufficient Encouragement is the first in the When Loves Bloom series. It stands alone as the story of Darcy and Elizabeth’s courtship and first days of marriage.

About the When Love Blooms Series

“Love is like a flower, for it is well worth the toil to cultivate it.” She shrugged her shoulders, “Love is beautiful.”

Take a stroll in the garden of love and enjoy the unique blooms of the intersecting lives of the Bennet, Darcy, Fitzwilliam, de Bourgh and Bingley families. Sufficient Encouragement follows Darcy and Elizabeth as they fight to save their love from an unexpected frost while Jane and Bingley’s love grows strong roots. The companion story, Renewed Hope, adds depth to the bouquet with the love stories of Darcy’s cousins and Miss Bingley. The third book in the series, Extraordinary Devotion, follows Darcy and Elizabeth’s marriage while their younger sisters experience a London Season.

4/16: Excerpt & Giveaway at Stories from the Past

4/19: Excerpt & Giveaway at Diary of an Eccentric

I’m giving away ONE ebook and ONE paperback to two lucky winners. Both open internationally! Comment below about why you love Mr. Darcy.