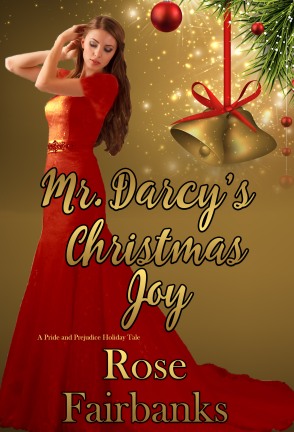 Just a short chapter today! Are you starting to put the threads together and see how it works?

Chapters Two and Three: Ding Dong Merrily on High! and We Three Kings

It Came Upon a Midnight Clear

Jane woke up with a smile on her face. She went to sleep downhearted and nursing wounded feelings over Mr. Bingley leaving the area. She tossed and turned for two hours before falling asleep around midnight. Then, she had the most splendid dream.

In her dream, the sky was filled with angels. They held harps of gold and floated near the Earth. They searched over the towns and countrysides to find people, like her, who felt dismayed about the cares of life. Some had mighty needs — a sick loved one or no food for their table. Others had small needs. All were immediately soothed by the angels’ presence and their song. “Peace on Earth, Goodwill towards men,” they sang in soft, gentle voices. The notes reminded Jane of waves lapping on the beach. They arced forward and then crept back. Jane allowed the melody to wash over her. At last, the angels came toward her, directing their song at her. In the dream, she had closed her eyes and raised up her arms. There were too many she could blame. Too many unanswered questions. But she did not need them. She chose to let them go.

In the morning, she awoke with uncharacteristic lightness. Jane allowed feelings of disappointment, anger, bitterness, and resentment about Bingley’s absence leave her. All would be well, she was sure of it.

Throughout the day, she felt as though she carried the song in her heart. She loved Christmastide and gloried in the Savior’s birth and the arrival of her dearest Aunt and Uncle. The Gardiners would arrive today. There was much to do. Her cousin and father’s heir, Mr. Collins, had just left two days earlier. He had recently become engaged to a neighbor, although he first proposed to Jane’s closest sister, Elizabeth. Their mother could not contain her anger at Elizabeth and never let her forget that she might have “saved them all” by marrying the heir to the estate. The result being Jane left to soothe Mrs. Bennet’s frail nerves and Elizabeth spending as much time as possible away from her mother. Most of the housekeeping now fell to Jane.

She did not mind. She always enjoyed being of use to her loved ones. What did hurt was her mother’s constant wailing over what might have been not just with Elizabeth, but with Jane. Her mother did not understand how her continual mentions of Mr. Bingley kept the wound fresh in Jane’s heart. However, after her dream last night, nothing could shake her sense of peace.

The Gardiners arrived an hour before dinner. Mrs. Bennet regaled them with a summary of their autumn. “Two daughters so close to marriage! I do not blame Jane, for Jane would have got Mr. Bingley if she could. No, I blame Elizabeth!”

Mrs. Bennet paused to blow her nose and then wag a finger at her most ungrateful daughter. “She might even have been Mr. Collins’ wife by this time! He proposed to her in this very room!”

Mrs. Bennet continued railing against Elizabeth for a few minutes, but at the earliest opportunity, Mrs. Gardiner turned the conversation. “It must have been some trial for your nerves, Sister, but could you tell me who is to dine with us tonight?”

Mrs. Bennet immediately straightened, her previous misery nearly all forgotten. “Several of the officers from the Militia which is quartered in Meryton. Did the girls write to you? My daughters are quite favorites with them all. Mr. Denny is coming.”

“You were certain to invite Mr. Wickham as well, weren’t you?” Elizabeth asked in an anxious voice. Mrs. Gardiner scrutinized her niece’s face.

A sudden chill filled Jane’s heart at the mention of Wickham even as a slight blush spread across Elizabeth’s features.

Jane watched as her sister smiled and seemed to bear their mother’s effusions and wailings better than usual. All the while, alarm grew in Jane’s breast where she had once known peace. Soon, the dinner guests arrived, and Wickham showed Elizabeth as much favoritism as ever. At the first opportunity, Jane stole away to speak with Elizabeth and tell her about her dream.

“Do you not see?” Jane asked Elizabeth when she was finished.

“At midnight, it all became clear. I am not to fret about Mr. Bingley, and you should not dwell so much on Mr. Darcy.”

“Mr. Darcy!” Elizabeth cried in astonishment. “No, I never dwell on him, if I can possibly help it.”

“Do not pretend your fascination with Mr. Wickham is about anything other than your displeasure about Mr. Darcy,” Jane said with a frown.

“Ah, there you are girls,” Mrs. Gardiner said as she rounded a corner and found them speaking in a hallway. “Did I hear the name, Wickham? I had wanted to speak with you about him, Elizabeth.”

“Do you like him, Aunt?” Elizabeth could not conceal her hope.

“He is a very charming man, but I must caution you about any growing attachment to him. If he had the living he was promised, I could see no evil in the match.”

Jane had an odd sensation, feeling as though she heard these words before. Elizabeth was putting up some kind of sarcastic argument with their aunt when the clock began to chime seven times. Growing dizzy, she groped the wall for support and clutched her head.

16 thoughts on “Mr. Darcy’s Christmas Joy- It Came Upon a Midnight Clear”