Last week, I discussed Jane Bennet finding independence and if she “deserved” better treatment than Bingley gave her. A friend, who is admittedly protective of Bingley, asked if I would ask the same thing of Captain Wentworth. And the truth is, I think he also deserves better than Anne Elliot’s treatment.

In several of my copies of Pride and Prejudice, the word “persuasion” is italicized in the following passage. I think it’s to draw attention to the fact that such a theme is a favorite of Austen. While not dealt with in detail in Pride and Prejudice, I did find some connections and wrote a blog post about them a few years ago.

“To yield readily— easily— to the persuasion of a friend is no merit with you.”

“To yield without conviction is no compliment to the understanding of either.”

If Bingley ends up yielding to Darcy’s persuasion and is undeserving of Jane than Anne Elliot is even worse. She had actually accepted Wentworth’s proposal. 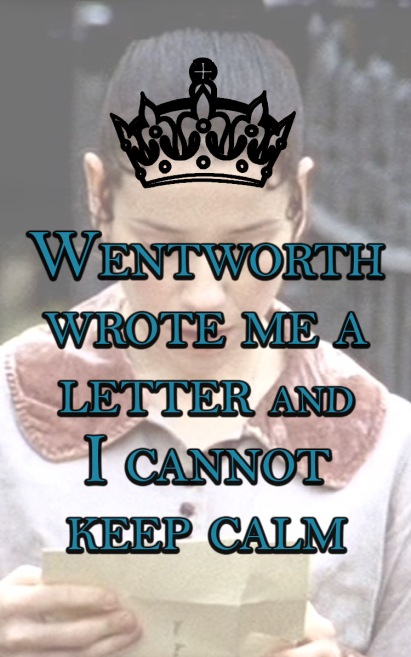 Now, I know all the arguments about why Anne should get a pass. Wentworth had little money, he might have died even. It threatened a breach with Anne’s family and then she wouldn’t have even been able to count on them. Lady Russell, who was a stand-in for Anne’s mother, counseled her against it. She was only nineteen. Wentworth probably should have never proposed in the first place since he had so little to give a wife (a la criticism of Frank Churchill and Edward Ferrars).

However, despite this, I still think Anne treated Wentworth wrong. You see, marriage, even if it’s not a love match (and both couples were), involve feelings. Pesky things, aren’t they?

Nearly all of the arguments about Bingley treating Jane wrongly are due to her feelings afterward. So why are Wentworth’s not considered? It is supposed because Wentworth is a man, he will get over the heartache of Anne’s rejection easier. Because he is a man, he can more easily meet other women. That he should totally understand her situation and feelings without Anne considering his. I am sure she told herself it was for his own good. That it was better for him to be unattached and find his fortune than delay their marriage or worry after a wife. But that’s just it. She belittles his feelings for her. Perhaps it’s because she had been used to think little of herself from her family’s treatment–but Lady Russell, for example, never says that of Anne and instead lifts her up. In her ladyship’s opinion, Anne is worth far more than Wentworth.

Likewise, Bingley had allowed himself to be convinced that Jane felt little to nothing for him. That his space in her heart could be replaced. Again, I say this is far more forgivable because they were not engaged.

At the end of Pride and Prejudice, we have hints that Bingley did talk to Jane about matters. There is some allusion to him mentioning seeing Elizabeth at Pemberley. To my imagination, Bingley never wavered in his love for Jane, but only in his intention. After he learned that although she was “free” for nearly a year, Jane still remained unwed, and after having a chance to resume the acquaintance with Elizabeth (i.e., he was not hated for his departure) he returns to Netherfield and along the way gets Darcy’s blessing. While we don’t see any sort of groveling, and it seems there would have been no time for him to do it before proposing, I do think it occurred.

At the end of Persuasion, Anne Elliot seems as adamant as ever that she was right in breaking her engagement to Wentworth and toying with his feelings. She considers her  feelings and not his when she says this:

“I have been thinking over the past, and trying impartially to judge of the right and wrong, I mean with regard to myself; and I must believe that I was right, much as I suffered from it, that I was perfectly right in being guided by the friend whom you will love better than you do now.”

Next, she places the blame on another:

“Do not mistake me, however. I am not saying that she did not err in her advice. It was, perhaps, one of those cases in which advice is good or bad only as the event decides; and for myself, I certainly never should, in any circumstance of tolerable similarity, give such advice.”

To be absolutely certain she is held blameless, Anne continues:

“But I mean, that I was right in submitting to her, and that if I had done otherwise, I should have suffered more in continuing the engagement than I did even in giving it up, because I should have suffered in my conscience. I have now, as far as such a sentiment is allowable in human nature, nothing to reproach myself with; and if I mistake not, a strong sense of duty is no bad part of a woman’s portion.”

Well, maybe it’s not all about you Anne! This conversation is then followed by Wentworth reproaching himself for not returning to Anne after he had earned his first prize money several years before because he had believed she would have refused him. How was he supposed to know that??? Why is he taking all the blame for this??

For a man who spent most of the book blind to his continuing love for Anne and the justness of her decision, I think he’s blind once more when he says this:

This is a recollection which ought to make me forgive every one sooner than myself. Six years of separation and suffering might have been spared. It is a sort of pain, too, which is new to me. I have been used to the gratification of believing myself to earn every blessing that I enjoyed. I have valued myself on honourable toils and just rewards. Like other great men under reverses,” he added, with a smile. “I must endeavour to subdue  my mind to my fortune. I must learn to brook being happier than I deserve.”

Listen, buddy. You did some wrong, and you are happy it’s all worked out. I will try not to judge the fact that your version of broken and flawed but workable is different than mine, but I don’t feel like this is resolved. I think this is going to be a sticking point in their marriage forever. Not that Anne caved to Lady Russell, but that, allegedly, he’s all wrong. He’s always wrong. Way to emasculate a man. Annie, hun, you need to bring it down a notch.

Between the two of undeserving lovers: Bingley or Anne, I think Anne was more heartless and less resolved than Bingley. In my imagination, it’s one of the things Austen would have worked on had she lived longer. I accept this only as “justice” because Anne did suffer during their separation and then witnessed his flirtation with Louisa. As it is, perhaps JAFF will answer the need for Wentworth to get his justice.