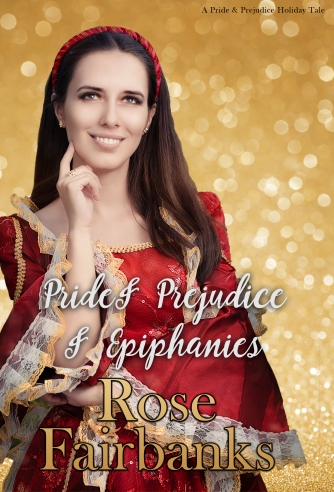 I Heard the Bells on Christmas Day

Kitty awoke the morning before Christmas Eve with a start. She felt she had overslept. Her brain was fuzzy with dreams she could not recall.

The house seemed quiet and still. Where was all the usual noise? In her seventeen years, not once had she heard silence in the morning. Her mother was always wailing and bemoaning something.

Scrambling from the bed, she checked the clock. No, she had not awoken very early. Was Mama ill? Lydia had already left the room. How strange!

Pulling a wrapper on over her nightgown, Kitty stuck her head out the bedroom door. Her mother’s door was open, and the room was empty. Creeping halfway down the stairs, she heard quiet conversation from a drawing room. Lizzy said something that caused a deep voice to lightly chuckle. Who could it be? It did not belong to her father or Uncle Gardiner.

Quietly slipping back to her room, she readied for the day. As she dressed, she heard the church bells announcing the hour in the distance. At least one thing remained familiar.

Arriving in the drawing room, Kitty could not contain her surprise at the presence of Mr. Darcy, Mr. Bingley, and a third gentleman introduced as Darcy’s cousin. He was a fine enough looking man and an officer in the Horse Guards. Making her way to him, unable to resist a man in uniform, she frowned when he leaned in close and whispered to Mary.

Strangely, Lydia did not appear enamoured of the man. She acted more sedate than Kitty had ever seen. Recalling her worry for her mother, she found Mrs. Bennet sitting in a corner with needlework, a fond smile on her face and her husband by her side.

Kitty stood in the middle of the room, mouth agape. No one seemed to notice her, which aside from the Christmas bells was perhaps the only familiar thing about the scene.

“You must be Miss Kitty,” an unexpected and quiet voice spoke at her side.

Kitty’s head jerked in the unknown lady’s direction. “Who are you?”

“Pardon me for not waiting for an introduction, but it seemed everyone else was otherwise occupied.” She waved her hand around the room. “I thought it was forgivable since we are to be sisters.”

“Yes, my brother will marry your sister.” Laughter danced in her eyes. “I thought a sister to my sister would make us sisters. I look forward to having so many!”

Kitty blinked at the young lady, who wore impeccable and fashionable clothes and whose beauty rivalled Jane’s. She glanced around the room. Jane sat with Mr. Bingley. A Christmas proposal for them would not be out of the ordinary, but this lady was not one of Bingley’s sisters. Mary was still whispering with the colonel, but Mary getting married? The man was a stranger! And no one cared for the plainest and most awkward Bennet daughter. It was almost as absurd as…Lizzy making love eyes at Mr. Darcy! As she was currently doing!

Lizzy said something, and Darcy chuckled—the voice Kitty had heard before. He scooped up Lizzy’s hand and kissed it.

“They will be very happy, I think,” the young lady beside Kitty said and sighed while looking at Lizzy and Darcy.

Kitty had nearly forgotten about the girl’s presence. “Miss Darcy?” Her voice rose in pitch.

“The one and only.” She smiled and curtsied. “Well, I suppose there are others with the name, but I mean that I am the only one from Pemberley.” Her brow furrowed. “That sounds arrogant, doesn’t it?” She sighed and continued rambling. “I mean I am Fitzwilliam’s only sister.”

Nervous laughter erupted from Kitty. This was the girl who Bingley’s sisters touted as an alternative to Jane? Attempting to stifle the laugh, as amazingly everyone else was quiet and well-behaved, it turned to a cough. Suddenly, she felt all eyes upon her.

“Kitty, are you well?” Mrs. Bennet’s voice came from across the room.

Relief filled her not to be scolded for once. “No, merely a dry throat.”

“Have your tea,” Mrs. Bennet said.

“Will you sit with me?” Miss Darcy asked.

Kitty agreed and sat quietly as Miss Darcy talked of her pleasure with the Bennet family. The silence and lack of arguing seemed as loud as cannon fire to Kitty. What had happened? Her voice sounded impossibly loud and uncouth compared to the demure actions of everyone else. Once or twice she tried to engage Lydia in laughter but did not succeed. Lizzy did much better with her subtle wit.

“Perhaps we will have guests for dinner,” Mr. Bennet said.

Kitty clapped her hands, causing everyone to jump and Mr. Darcy to frown. “Do you expect Colonel Forster? Will he bring other officers? Mr. Wickham would be a lovely dinner companion.” And much livelier than the unrecognisable people before her.

“Mr. Wickham will never step foot in my house again,” Mr. Bennet boomed and shook the walls as an earthquake might.

Tears welled in Kitty’s eyes. She had never heard her father so stern or mean before. Heat slapped her cheeks as she considered that everyone listened to her reprimand. He never censured Jane, Lizzy, or Mary. Now Lydia had become a turncoat. They never knew what it was like to feel as unloved as she did.

“Why not? What did he do but be used by Mr. Darcy?” Kitty bowed her head to hide her embarrassment and tears. “Just because he hates poor Wickham does not mean we must!”

Beside her, Miss Darcy trembled. For a moment, the room was so quiet that one could hear a hairpin drop. Then Kitty heard boot steps. They paused in front of her.

“Miss Kitty,” Darcy’s deep voice drew her face up. “I am sorry if your father’s decision has upset you. I do not like Mr. Wickham, but I do not hate him. He has hurt my family and wounded my sister. He plotted against yours.”

Kitty gasped and looked at Lizzy, whose eyes were shiny. A hand went to her throat, and Kitty could see the red outline of a new scar. Miss Darcy squeezed Kitty’s hand.

“If he has hurt you as you say,” Kitty said slowly, “then why do you not hate him?”

“Hate drowns out love,” Darcy said. “And I want to live my life full of love. It is your father’s love which sends him to protect you all from Wickham.”

Kitty’s bottom lip trembled as her father walked up as well.

“Forgive me for speaking so harshly,” Mr. Bennet said, placing a hand on her shoulder. “What Mr. Darcy says is true. I have been too selfish in the past. I have neglected you, as well as your mother and sisters. That has been my fault, not because of a deficiency in you.”

“So you do love us all?” Kitty twisted her hands. “Even me?”

“What would I do without my Kitty?” He pointed at his chest with a finger, covered his heart with both hands, and then pointed at his second youngest daughter.

“What was that?” Kitty sniffled.

He smiled. “I know how you love languages. Out of all my daughters, you are the one most gifted in learning foreign tongues.”

“You always say it is because I never cease talking.”

“Forgive me for teasing you. The truth is I’m in awe. What if we learn a new language together? You will not have to put up with my poor pronunciation.”

Mr. Bennet again pointed to himself, covered his heart, and then pointed at Kitty. “It is a new language I have heard about, created for the deaf.” He did it again. “It says what I struggle to put into words. I love you.”

The church bells chimed again, and Kitty’s vision blurred even as a feeling of peace filled her heart.