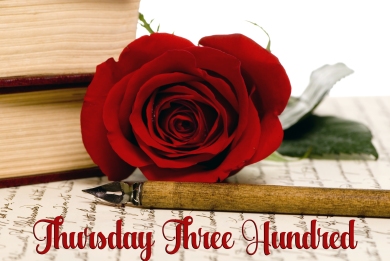 For a year or two now (or longer??) I’ve been enjoying Leenie Brown’s blog posts on Thursdays (well, all the posts). Each week, she shares at least 300 words of a story and it is connected to her Music Monday and Wordless Wednesday posts as well. I’ll be doing it a bit different than Leenie. My aim is to have a completed “micro fiction” each week. For the next few weeks they’ll be heavily influenced by copyrighted songs I like so they’ll never be published. However, it will keep me writing, just a bit, during an otherwise tumultuous time in my life (moving again and end of school year craziness!).

This week, I was inspired by Thomas Rhett’s “Unforgettable.” You can listen to it here. Did you know experts think the Meryton Assembly occurred around October 14th? The song references several modern things but, in my heart, I’m a Regency girl so I thought I’ll try Regency next week. Tell me which you like better!

Chuck scanned the block party for a place to sit. He had just moved to the neighbourhood, and they were already holding a block party. Of course, each person he met handed him a beer. Southern hospitality. The night had just begun, and he already had more than a buzz. His friend Will had been pacing around the periphery on his cell phone the entire time they had been here. Chuck’s sister Carly twerked in Will’s general direction to the clear astonishment of anyone else around her.

Shaking his head, Chuck pushed through a cluster of middle-aged men attempting to rock their dad bods. He thought tables were on the other side of the suburban linebackers. Then he saw what they had been none too subtly staring at.

Air left Chuck’s lungs as his eyes scanned a woman’s toned body and shiny blonde hair. Dark blue jeans clung to her curves with red peep-toe high heels hinted at a flirty personality. She wore a black graphic tee sloping off one shoulder exposing sun-kissed skin. She seemed to radiate. She swayed in her chair to the music and now and then she chewed her bottom lip. Why wasn’t she dancing? A woman as beautiful as she must have countless men wanting to talk to her.

Emboldened by his liquid courage, Chuck approached. “Mind if I join you?”

The goddess gave him a skeptical look. “Are you drunk?”

“Absolutely sober, babe.” Chuck stuck his hand out to introduce himself and knocked over her solo cup.

“Yeah, right,” she laughed before covering her mouth.

Time stood still, and it had nothing to do with inebriation. The woman was stunning several feet away. Up close and with a smile on her face, she was the most beautiful woman Chuck had ever seen. If looking foolish made her smile at him, he would do it again for the rest of his life.

“Chuck Bingley,” he pushed his hand forward as if nothing was wrong.

“Jane Bennet.” The smile returned as they shook hands.

Plain Jane? He would never think of the name the same.

“I just moved here. Have you lived here long?”

“My whole life,” Jane shrugged. “Usually, the block parties are over when school starts, but I think Lucas, the HOA manager, wanted to impress you.”

“They did all this for me?” Chuck looked around. An unusual amount of eyes were focused on him.

“That McMansion up on the hill has sat empty for years. Construction slowed after the housing bubble burst about ten years ago. They’re all hoping that with you moving in the other lots will sell.”

“Hey, Janie,” a young man wearing a polo shirt with a popped collar and with bleached tips to his spiked hair sat down.

“I haven’t,” Aaron didn’t even look in Chuck’s direction. “You ready to cut out of here?”

“I wouldn’t be a very good girlfriend if I left Chuck hanging like that,” Jane narrowed her eyes at the intruder.

“Girlfriend?” Aaron choked on his swig of cheap beer.

Chuck almost did the same.

“You move fast, man,” Aaron said and stood so fast he knocked the table. “You dig him for his money?”

Jane smirked, and Aaron sneered at them before leaving. She dropped Chuck’s hand as soon as the jerk left.

“Sorry about that,” she blushed.

“I’ll be your boyfriend any time.”

“Sure,” she drew out the word.

“If I were drunk I wouldn’t have the intellect it takes to guess your middle name.”

Jane shook her head and burst out laughing. “That’s a display of genius according to you?”

“Wow, first try.” Chuck’s middle name was Roger, but he’d say it was Banana Hammock to keep Jane talking to him. “Stunning and smart.”

Jane blushed. “It’s not even Albert, is it?”

Jane shook her head. For the next half hour, they laughed as they continued to guess each other’s middle names. Jane went through three more mangoritas, and Chuck counted six beer cans in front of him. He’d have a devil of a hangover tomorrow.

“Let’s dance,” Chuck said and pulled Jane out of her chair.

“I love this song!” Jane was grooving around. “Show me your moves, Chuck!”

Full of false confidence and poor decisions, Chuck broke into the Running Man even though it didn’t match the rhythm of the Coldplay song at all. Jane almost fell over in laughter but joined him. The most hysterical moment was when others followed their suit. As the song came to an end, Jane pushed back her hair from her eyes. She fisted Chuck’s shirt and pulled him in for a kiss.

“I’m going to remember this forever,” Chuck said as he placed his hands on her face and caressed her lips with his.

“Wait and see. I’m going to marry you. Maybe then I’ll finally know your full name.”

Chuck kissed her again, feeling her shake with laughter.

A year later, they were in the same location, and again Jane laughed during his kiss.

“I present to you Charles Roger and Jane Danielle Bingley!” the DJ announced over the mic before they stepped onto the dance floor.

“Today has been unforgettable!” Jane cried over the music.

“Every day with you has been unforgettable, since the very first moment I met you!”