In the wake of the BBC’s outstounding production of North and South starring Richard Armitage and Daniela Denby-Ashe, it’s easy to forget that Margaret Gaskell wrote the story about an industrial town and about an industry that was still new.

Here, we have Mr. Thornton educating Mr. Hale a bit on the topic of the cotton trade.

‘You seem to have a strong objection to acts of parliament and all legislation affecting your mode of management down here at Milton,’ said Mr. Hale.

‘Yes, I have; and many others have as well. And with justice, I think. The whole machinery—I don’t mean the wood and iron machinery now—of the cotton trade is so new that it is no wonder if it does not work well in every part all at once. Seventy years ago what was it? And now what is it not? Raw, crude materials came together; men of the same level, as regarded education and station, took suddenly the different positions of masters and men, owing to the mother wit, as regarded opportunities and probabilities, which distinguished some, and made them far-seeing as to what great future lay concealed in that rude model of Sir Richard Arkwright’s. The rapid development of what might be called a new trade, gave those early masters enormous power of wealth and command. I don’t mean merely over the workmen; I mean over purchasers—over the whole world’s market. Why, I may give you, as an instance, an advertisement, inserted not fifty years ago in a Milton paper, that so-and-so (one of the half-dozen calico printers of the time) would close his warehouse at noon each day; therefore, that all purchasers must come before that hour. Fancy a man dictating in this manner the time when he would sell and when he would not sell. Now, I believe, if a good customer chose to come at midnight, I should get up, and stand hat in hand to receive his orders.’

Margaret’s lip curled, but somehow she was compelled to listen; she could no longer abstract herself in her own thoughts.

‘I only name such things to show what almost unlimited power the manufacturers had about the beginning of this century. The men were rendered dizzy by it. Because a man was successful in his ventures, there was no reason that in all other things his mind should be well-balanced. On the contrary, his sense of justice, and his simplicity, were often utterly smothered under the glut of wealth that came down upon him; and they tell strange tales of the wild extravagance of living indulged in on gala days by those early cotton lords. There can be no doubt, too, of the tyranny they exercised over their work people. You know the proverb, Mr. Hale, “Set a beggar on horseback, and he’ll ride to the devil,”—well, some of these early manufacturers did ride to the devil in a magnificent style—crushing human bone and flesh under their horses’ hoofs without remorse. But by-and-by came a reaction, there were more factories, more masters; more men were wanted. The power of masters and men became more evenly balanced; and now the battle is pretty fairly waged between us. We will hardly submit to the decision of an umpire, much less to the interference of a meddler with only a smattering of the knowledge of the real facts of the case, even though that meddler be called the High Court of Parliament.

There are a few things happening here at once. In the middle, we have Margaret inferring that because Thornton is serious about his business, he must have no care for anything else. More importantly to the subject I will be discussing is the brief history of the Industrial Revolution (IR). Notice Thornton does not give the evolution in the machinery but rather the relationships between masters and laborers.

The very first masters of the new machinery developed during the IR were the inventors of the machines. Unlike today where there are think tanks which hire people to invent new products and create ideas, these inventors were simply workers. Farmers would sheer sheep and spin the wool. They were the ones intimately acquainted with the process and they were the ones who saw the need for innovation. A few handy ones began making equipment. This process was repeated in similar fabric manufacturing trades, such as linen and cotton.

Above: On the left is a traditional spindle and on the right is a Spinning Jenny which can produce much more and much faster. Arkwright’s invention of using a water frame (below) made the produced thread stronger and more durable.

The goal, at first, was simply to lighten their own load. However, word soon got around and neighbors also wanted to use the machines. Creating them, however, was expensive and time consuming. Additionally, the machines grew ever larger so they could process more at once. So, some enterprising sorts asked various merchants for help investing to come up with the money for housing the equipment and the laborers who were now leaving the firesides of their farms. Typically, the inventor would remain overseer of the facility and the first “master.” 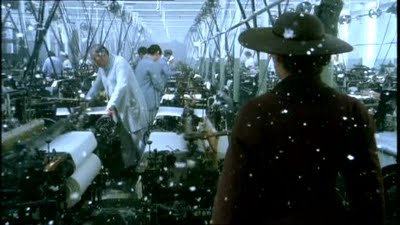 These were not men who were trained or educated in business in anyway. They did not know how to lead men and, oftentimes, had been poor tenant farmers under potentially harsh masters themselves. Perhaps they copied the only example they knew. They also became insanely wealthy–far more than they ever would have dreamed possible as a tenant farmer. The adage of absolute power corrupts absolutely is always true. Eventually, workers pushed back for fairer treatment–sometimes caught up in the parallel movement of the Luddites at the close of the Napoleonic Wars some twenty or thirty years after it began. Reports of cruel masters abound during that time and it was an enterprise almost entirely unchecked by the government.

One of the great equalizers, however, was that not all the inventors could successfully gain patents. Many plans were copied or outright stolen by men who had a keen eye for business but not much knowledge of manufacturing. Others were simply improved upon–even Sir Richard Arkwright who is usually given credit for inventing the first water frame and creating the factory system built upon the success of other men. As more and more machinery became available, the position of master became less god-like. They were beholden to more standards as they had more colleagues and employees. Instead of there being one mill in a town, entire towns were built around a variety of mills. We see this in North and South with Mr. Thornton’s relationship with other nearby mill owners.

In the above passage, Thornton argues that however flawed the masters of Milton currently are, they’re better than they had been and that’s a context a man like Mr. Hale–or Parliament–can’t understand.

One thought on “Thornton Thursday–Arkwright’s machine”