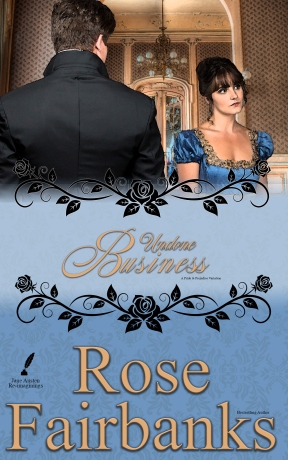 Undone Business was like a revelation for me. It started as a novella destined for a multi-author JAFF anthology that didn’t end up being produced. It was going to be named When Love Blooms, a title I later re-used. At the time, I really liked using phrases from Pride and Prejudice for my JAFF stories and so I changed it to Undone Business from this quote:

and yet what is there so very laudable in a precipitance which must leave very necessary business undone, and can be of no real advantage to yourself or anyone else?”

The “what if” question in my head when I began was “What if Sir William Lucas never interrupted Darcy and Elizabeth’s dance?” Would they talk about more things? Would Darcy be as determined that Jane was indifferent to Bingley? Without Sir William’s words which made it sound like Bingley’s honor was nearly engaged, would Jane and Bingley have found their happily ever after? Would Darcy and Elizabeth avoid all the heartache and drama of the Hunsford refusal?

“Thank you for telling me,” she said softly. “I…I think I know you better now.”

“And I know you better now.”

“Oh yes, vain and simple-minded creature that I am.”

He extended his hand and nearly touched her face before dropping it limply to his side. “No, never that. Forgive me. I was angry at myself more than you. Your complaints are just. I have appeared haughty and arrogant, and I would never wish for you to accept me for anything less than love.”

Her heart actually ached as though it was pierced and in its pain it cried out to her that she should accept him now. Not today, her mind replied, everything is too new.

“Then…then do we say goodbye now?”

He visibly swallowed, but his eyes never left hers. “How am I supposed to give up trying? I know not how to go on. Loving you has become a part of who I am.”

She trembled, longing to give in to the love he still offered. “Nothing has changed, you know. My mother’s family still comes from trade. My nearest relations still behave poorly. Society may still shun me.”

“Nothing has changed,” he said with disaffected calmness. “Good day, Miss Bennet.”

He turned and walked away, leaving her alone and astonished. She had not meant to discourage him entirely, to make him think nothing had changed in her regard for him. She watched his back for a moment knowing she had lost her chance forever. Gently-bred ladies do not race after men and declare newly-born sentiments and demand they propose; nor do men of such pride and sense propose to a lady who so callously spurned their first attempt.

She looked down to the letter still in her hand and traced her name on the envelope. There was no reason to keep it now, she had heard all his confessions and believed him among the best of men. Refusing to weep she simply sat on the ground, not caring it was slightly wet from the dew still. She tore open Darcy’s letter. It simply said:

Forgive me. I love you.

She could contain the tears no longer.

For each story, I try to do something that challenges me. It wasn’t immediately clear what that would be in Undone Business. As the story progressed, however, I wondered what it would be like if I gave Jane Bennet someone else to marry. I went into the situation with quite a bit of prejudice. Did she really love Bingley? Can you truly only love one person in life? So often in literature and films, the person realizes it was never really love they felt for the other. Thus far, every non-Bingley pairing I had read was like that. Jane ultimately realized she had only loved the idea of Bingley. She recognized the flaws she had previously ignored and then the love goggles came off and she was free from regret of losing him and found someone better. Full disclosure: I’ve known a shocking number of women who fall in love with every man who passes their way. I’ve always internally scoffed that what they felt was not love. And, it might not be–but it might have been. The heart CAN love more than one person in a lifetime (although not at the same time–I do draw the line there!)

What sort of character growth does Jane have to go through to recover from genuine heartache over Mr. Bingley? Who could be her perfect match?

“Eyes the blue of forget-me-nots under a midsummer sky,” he said.

She furrowed her brow. The words seemed familiar. She must have read them in one of Elizabeth’s poetry or botany books.

“Jane Bennet, all grown up,” he remarked in something like awe.

“I do not believe we are acquainted, sir.”

He shook his head. “Yes, I would assume the passage of eight years would erase all memory of me. I am Isaiah Burton.”

Growing embarrassed as she could not recall him, she spoke hastily. “Mr. Burton, I am obliged to you. I apologise for delaying you. Good day.” She turned to leave.

“You still do not recall me, do you?” He followed after her.

Bristling that this stranger would think she should recall him, she stuck her chin out. “As you say, if we have met, you acknowledge it has been many, many years. I simply cannot recall every gentleman of questionable breeding I meet with.”

“With as many admirers you must have had, I am unsurprised. There was a time, however, when you visited your uncle in town when you did not find my breeding and manners so repulsive. Tell me, is that why you are still unwed? You did not correct me on your name, so I can only assume you are still single.” His voice sounded a mixture of offence and humour.

She turned to face him and in her seldom-felt anger felt more like Elizabeth than herself. “Because I am three and twenty I must be foolish to not have flung myself on any of the stupid ninnies I have met with? Oh yes, marriage to any of them would have been a delight over my present state. For certainly being in the care of healthy and doting parents and living with my three younger sisters, must be very pitiable. Or do you presume marriage is the only tolerable position for a young lady? As you are so interested in my own state, I assume you are also unwed yourself. Now, why has not a lucky lady ensnared you, Mr. Burton? For surely your manner recommends yourself to all.”

Having said her piece she turned to leave again. Her heart beat fast. She had never said something so unforgiving in her life. And she desired to flee before he had a moment to react. But was that…laughter? He was laughing at her!

“You have changed quite a bit, I see. The girl I knew was much too docile to have even a shred of the spunk for such a speech, even if you looked about as fearsome as a kitten. I shall have to amend my poem. You are no longer as mild as a lamb.”

Her steps ceased as she recalled his words. Isaiah Burton was the man who wrote her very bad poetry when she was but fifteen. Her aunt and mother were certain he would offer for her, but he never declared himself before leaving for a business trip and before he returned she departed again for Longbourn. When she returned to London the following year she had not seen him, but was not so affected by him to even ask her uncle what happened to his business friend.

I also usually have a research topic for each story. In Undone Business, it became the abolition of slavery in the United Kingdom. Shockingly, Bingley inserted himself in that.

She showed him he could make decisions for himself, that he ought not to shy away from a confrontation and that he should not leave matters undone, for in the course of six and twenty years it was exceedingly tempting to cast off his lofty visions and allow younger and seemingly abler men finish this all-important task.

“Speech! Speech!” the crowd cried, and the gentlemen deferred to him.

He stood, with not a wine glass in hand, but a tea cup. “I thank you all, the friends young and old who helped in this worthy endeavour. You saw beyond the shallow fickleness of our lives of luxury. You looked beyond selfishness and saw suffering. And while even I was tempted to paint everything in the best light, there comes a time when all mankind must stand for truth and righteousness. And now…” he took a sip, “I very much look forward to enjoying my first taste of sugar in over twenty years, and it harvested from entirely paid labour. My solicitor will bemoan my pocketbook and my wife will bemoan my health, but I will drink it in delight and know the dignity our friends and equals in the Indies now have in earning wages for their work.”

He sipped again, and an applause broke out. He held up his hand. “But there is more work to do yet, my friends. Let us not leave our business undone. Tonight we celebrate and tomorrow we work.”

The group murmured their agreement and smiled in return. As he sat, he wondered what next would become the business of his life.

If you have never read Undone Business, I hope you’ll try it. It is a very different sort of story but one that is as close to my heart all these years later as it was while I wrote on it. You can see shades of the writer I continued to grow into. I would go on to write more about 19th-century politics. I have played with the Jane and Bingley pairing other times. I have grappled again with the question of eternal love.

Undone Business was like a line in the sand for me. I think of it as the book where I became my own writer. Personally, I nearly quit publishing after Letters from the Heart. It was before working on Undone Business that I determined I would make writing my career. I made that decision knowing I had several other stories. No Cause to Repine and A Sense of Obligation were already completed and only awaited professional editing. I had dozens of short stories. I had already started on Sufficient Encouragement, what has become the Loving Elizabeth Series, Mr. Darcy’s Bluestocking Bride, and many others that continue to wait their turn. Undone Business was the first story where I wrote it with the entire intent on publishing it and it amped up the pressure. Still, I am proud to say that I had the integrity to stay true to myself rather than worry about what would sell. As I said at the beginning of this post, Undone Business was a revelation.