This week I didn’t get to write anything new, which means it’s been a crazy week. Instead, I edited A Sense of Obligation. I’ve mentioned before that I expanded Jane and Bingley scenes and here’s a snippet from one of my favorite additions! 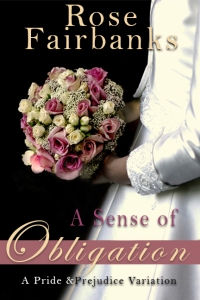 In the carriage on the way to his solicitor’s office, he shook his head. Caroline had not taken the news of his engagement to Jane well. She took the news of Darcy’s engagement to Elizabeth even worse. When Miss Lucas’ betrothal was announced at the ball, Caroline’s mouth fell open. He found Charlotte Lucas very pleasant company, but women like his sister only saw that she was plain, nearly on the shelf, and had no fortune and no style. Caroline had not kept her complaints to herself in the days between the ball and Darcy’s wedding.

“What can possibly recommend her to him?” she asked over breakfast while Darcy was out riding the morning after the ball.

“I daresay he loves her,” Louisa replied.

“Love? Nonsense! Why should a man of Mr. Darcy’s stature marry a woman as lowborn as Eliza Bennet for love?”

He and Louisa shared a look and simply shook their heads.

“He has a duty to his estate and blood line to marry someone of better standing. It was rumoured he would make a match with his cousin.”

Bingley rolled his eyes. “You have spent years saying that rumour was incorrect. You cannot change your opinion merely because he did not choose you.”

Caroline scoffed and rose to pour another cup of tea. “You ought to have done better than Jane, too,” she said. She furiously stirred the tea, and the spoon clanging on the side of her teacup grated his nerves nearly as much as her words.

“Jane is a gentleman’s daughter and will make a wonderful mistress to any estate I purchase. I have done fine by my duty.”

She returned to her seat and pouted a moment. “There were far too many betrothals announced at the ball! Reverend Black’s scandalous sermon the other week must have instigated all of these. Good heavens! Can you imagine Miss Lucas found in a compromising position?”

“That is enough! I will not allow you to malign another person’s name at my table.” It had felt good to take a firm stand.
Caroline continued as though she did not hear. “It must be why Darcy proposed to Eliza as well. I am certain she used some kind of allurement on him when she stayed here. There was no need for her to arrive at all! She came solely to gain Mr. Darcy’s notice!”

Bingley stood and tossed his napkin on the table. “You have gone too far. You have attempted to smear Miss Lucas’ name and now Darcy and Miss Elizabeth’s. Who is next? Jane? Me?”

“Do be serious, Charles. You at least liked Jane the entire time we have been here. If only you would have returned to Town, we could have nipped this little infatuation in the bud, but you must see it is quite different than Darcy’s interest in Eliza.”

Bingley had turned red in anger. “It is clear you will not learn. I will not be beholden to your welfare any longer. You know I journey to London in part to change matters of your dowry as you are recently of age, and I am no longer your guardian. As such, you will have complete control of your shares of our Father’s company, and I encourage you to either marry this Season or make plans for your own establishment, for you will no longer be welcome in my home.”

A Sense of Obligation is available now for preorder on Amazon and will be releasing there, Nook, Barnes&Noble, Kobo, ibooks, GooglePlay and Scribd (I hope) on July 25th.

2 thoughts on “WIPSunday: A Sense of Obligation”