I’m so excited to feature Cat Gardiner’s latest, Denial of Conscience!! Cat has shared a wonderful outtake with us. This scene occurs off-screen after Darcy dances with Elizabeth at the studio and after he returns to his home in Asheville, North Carolina, hoping to forget all about her. I’m sure you’ll recognize his feelings and certain iconic imagery. 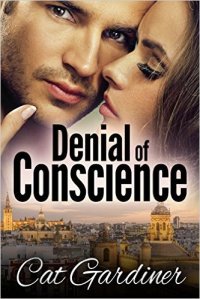 Darcy’s refuge was in sight as the Harley hugged the winding road upward toward the home he shared with Georgiana outside of Asheville, North Carolina.  Above him, he could just make out the western pitch of the roof behind towering trees.  Even beyond the distinct treble of the hog’s exhaust, he could hear the nearby waterfall roaring beside him – hidden, yet imaginatively visible.  This part of Black Mountain always remained unchanged, barely traversed even at the height of hiking season.  His mind still reeled from his dance with Liz and his subsequent, horrific visit to Pemberley.  Damn if the rooftop before him and the powerful waterfall beside him weren’t, far and away, the most welcome thing he’d seen since he left Virginia.

It was a gorgeous ride, and the mountain was especially spectacular.  It must have recently rained; everything looked green and lush, feeling fresh and alive.  His mind traveled to the gorgeous woman he had danced with two nights earlier.  The memory of the way she had responded to him and how she eagerly settled into his hand resting upon her back did things to him. The way she hadn’t flinched when with each step forward, his long legs brushed a caress between her inner thighs left him unsettled and heated – then and now from just the recollection.

He veered the motorcycle left, down the dirt road leading away from his house on the hill. Riding a short distance further, he came upon his favorite place. Too small to be a lake, too large to be a pond – but whatever it was considered, it was his private sanctuary.  He came to a full stop within the trees, then dismounted, removed his helmet, and soaked in the streaming sunlight upon his face.  A deep breath of the honeysuckle’s sweet scent filled his lungs as he took in the serene splendor before him. Peace was in that moment.

Again, his mind wandered to Liz, who, as if a thirst-quenching draft of water to his arid soul, tempted him with lips that begged to be suckled and kissed. He recalled the seductive sheerness of the sundress clinging to her shapely figure and how her body felt pressed against him with each corte dance step. The fire in her eyes only made him more curious about the intriguing, enigmatic veneer she displayed.  Yes, this woman heated him to the core.

If only … if only I could just see her and hold her one more time, he thought.

It was only minutes before he stood erect at the water’s edge, frustrated and aroused, wearing only black boxer briefs.  With perfect form, he dove into the cool water. He spent the next forty minutes tempering his desire, willing himself to vanquish the branding encounter with a woman who was set to marry another.  But with those fierce memories, and his inflamed desire, not even the Iceman could overcome Liz’s scorching presence in his imagination.

Cat said I could talk a little bit about Liz in this book and I jumped at the chance. When I first read this story it was at an online forum and had an “out of of character” tag on it, which made me skeptical to try it. I had enjoyed Lucky 13 when it was posting and felt like I could trust Cat to offer another great story and reading experience and I’m so glad I tried it. I enjoyed the story even more on this second reading!

To be sure this blurb:

Elizabeth Bennet, a young woman hiding from living life to its fullest, finds herself willing to accept an untenable marriage arrangement solely for the sake of achieving her father’s selfish aspiration to save the family’s historic home. But even duty and obligation fail to hinder her inner conscience from spurring her to leave – to run – to escape before it’s too late. Prompted by a cataclysmic event and the arrival of an attractive, enigmatic man, Liz is thrust into a dangerous liaison where her spirit learns to fly amidst international intrigue.

doesn’t sound too much like the usual headstrong, fiercely brave and independent Elizabeth we typically read in variations, but I don’t think she’s so out of character. The situation has changed drastically, but the elements that Cat has used to cook up her Liz are all from Austen’s recipe.

In the original Pride and Prejudice, Lizzy felt a lot of familial duty. She loved them, but didn’t quite think well of them. She knew she was her father’s favorite child. She tells Mrs. Gardiner that her father’s good opinion of her means the world to her. When Darcy is asking Mr. Bennet for Elizabeth’s hand, she is worried about hurting his opinion of her.

She does turn down Mr. Collins, but only because her father is alive and despite his teasing Mrs. Bennet seems rather unconcerned about the likelihood of his family truly being cast into the hedgerows and considering Mr. Gardiner was assumed to have paid Mr. Wickham 10,000 pounds to marry Lydia and his frequent ability to travel he seem quite well to do. JAFF fans will recognize the idea of putting Lizzy in a situation where she feels compelled to marry (Darcy, Collins or another man) for the good of her family’s welfare.

Austen also says a lot about her heroines by comparing and contrasting their female relationships. In the original, Elizabeth paints Jane as very sweet and incapable of hurting anyone. But she does hurt people. She hurts her family by not being truthful. Perhaps if she also acknowledged their bad behavior, Elizabeth would have more of an argument to stand on and Mr. Bennet would take his family in hand. At the very least, it wouldn’t make Elizabeth feel alone and misunderstood. As Jane goes through mental somersaults to arrange everyone and everything as kind in her mind, Elizabeth is forced to be the truly responsible and realistic person in the family and she stands there alone. Frankly, Jane’s choice of only seeing things in the best light is selfish.

In Denial of Conscience, Liz only has her older sister, Jane, who fully realizes her selfishness. She has no best female friend that we see and instead, Liz takes on Charlotte’s role herself. Throughout DoC, Ms. Gardiner explores the complexity of living within two worlds, of being two persons and denying your inner conscience. In Pride and Prejudice, Charlotte and Elizabeth were nearly of uniform minds (as opposed to the strong contrast between Darcy and Bingley in their unlikely friendship) until the fall we meet them. Then, as Jane’s reserve hinders her relationship with Bingley, we see Charlotte’s practicality emerge and when she accepts Mr. Collins Elizabeth is entirely blindsided by it. Yet, if they had been such good friends for so long, how did Elizabeth not see this side of Charlotte? Or did she only see what she wished to see? And if Charlotte could make such a choice, does it mean that in the right set of circumstances Elizabeth could also call herself “unromantic” and make choices based on expectations and responsibility?

In the end, both Austen’s Elizabeth and the Liz of DoC are searching for a man who is educated enough to broaden her world, strong enough to stand up to her, selfless and devoted and unafraid of her curiosity and intelligence. As a daughter, sister and friend she was never an equal, but Austen’s Elizabeth Bennet finally found mental and character equality in her marriage to Fitzwilliam Darcy. So, too, does DoC’s Liz find equality in her relationship with her own Darcy.

To conclude, I’m offering up some of my favorite lines from the book that help show Liz’s character and motivations:

Maybe, like him, she had denied her conscience and its promptings to flee for survival. He wondered if she was afraid of abandonment again and maybe that was why she chose to marry a man whom she didn’t love. She was afraid of heartbreak.

She was an assassin, too, sneaking into his heart, shooting pangs of yearning and desire through him, disarming him with her wit and smile, leaving him quivering at her feet from just the touch of her lips. Only her kind of death-dealing had the power to destroy and melt the Iceman with the heat of her nearness, but the Iceman was needed now.

“No, but I should have realized the extent of his desperation. I feel responsible for having been his enabler since my mother left. Jane had the foresight to leave. I stayed and denied myself everything so he would be comfortable and at peace. I think I created the desperate man he became, fostering that notion that Longbourn was all he had. I nursed his obsession.

“Darcy did this. When he agreed to take me along, he forced open that door I hid myself behind a long time ago. I feel free to fly, and he’s right there with me.”

“Dad. I don’t love him because I need a father’s unconditional love and encouragement. I love him because he is everything I ever dreamed of finding in a mate. He makes me feel alive and fearless, cherished and respected. He encourages me to be myself. He’s my equal. Fitzwilliam and I are so similar. We complement each other perfectly. I already have a father’s love, now I have a partner’s love as well.”

Denial of Conscience is available at:

Cat Gardiner loves to take you around the world in her novels, places you may never have been with music you’ve never heard. A member of Romance Writers of America and her local chapter TARA, she enjoys writing across the spectrum of Pride and Prejudice inspired romance novels. From the comedic, Christmas, chick-lit “Lucky 13” to bad boy biker Darcy in “Denial of Conscience,” contemporary genres will appeal to many of her readers.