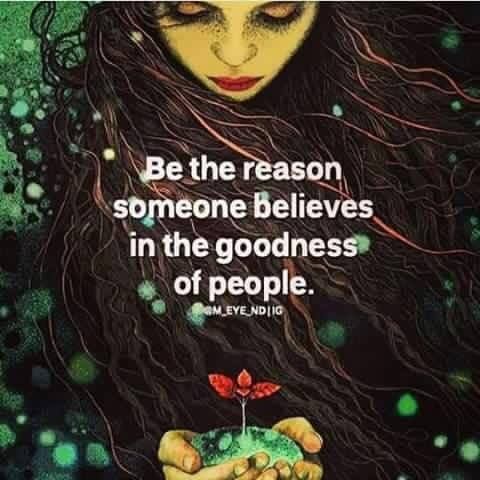 I don’t know if I’ve shared this image and quote before, but I think about it a lot. With everything going on in the world, I still believe in the goodness of people.

A boy from my church is undergoing testing on his liver. His blood isn’t clotting right, and his liver and spleen are enlarged. It means he has to quit playing on the football team, which means the world to him. Friday night was the first game of the season. He stood on the side lines as a coach. Afterwards, both teams gathered around and prayed for him.

I’m sure there were some kids on the team that don’t believe in God. I’m sure there were people in the stands that didn’t either. Whether they prayed or not, doesn’t matter so much. The point is, they had been rivals on a field of play but still banded together to care about one of their own. Each one of those players were able to think about how hard it would be on them to give up the sport they love so much. Every person in the stands was able to think about how hard it would be on them if their loved one was going through this. And if they disagreed with the mode that the concern was expressed, they remained respectful. Maybe they prayed to their God(s) by a different name. Maybe they just sent good thoughts. Maybe they didn’t care one way or the other, but they recognized it was very serious for others. No riots broke out. No one pulled out signs to protest. No one shouted at another, trying to force their understanding of the world down another’s throat.

Do you have a story of seeing the good in humanity?