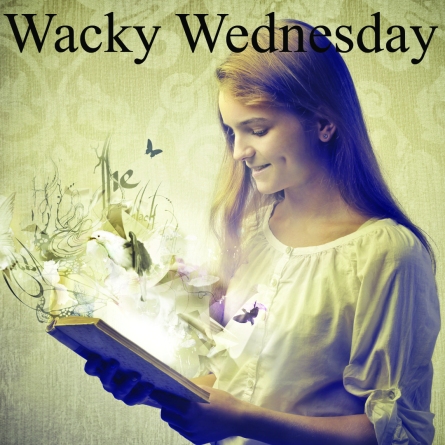 Can you guess which Jane Austen heroines I have mixed up in the following opening line?

Emma Woodhouse, handsome, clever, and rich, with a comfortable home and happy disposition, seemed to unite some of the best blessings of existence; and no one who had ever seen her in her infancy would have supposed her born to be an heroine.

Could you imagine a story in which Emma Woodhouse experienced Catherine Morland’s circumstances? Wacky indeed! I don’t have any current plans for such a story but I challenge you to consider the possibilities. What do you think might change about Northanger Abbey if Emma Woodhouse were the heroine? What if they both swapped and Catherine is the wealthy heiress of Hartfield? I wonder if Mr. Knightley could tolerate Catherine’s naivete or if Henry Tilney would be annoyed at Emma’s snobbiness. Catherine would never insult Miss Bates but at what moment would she learn she had over-indulged her imagination? When would Emma have to face her bad manners and interference if living in Catherine’s shoes?

As a Jane Austen Fan Fiction writer, it’s not enough to just take a story and “mess” something up. One must consider how a story would change when a detail is altered. The second story I ever wrote was inspired by a writing prompt on a free forum. It was about “wacky holidays.” There were several suggested. One was “letter writing day.” From that prompt, I wrote what became Letters from the Heart. The first draft was “The Best Laid Plans.” It was intended to be a short story of only a few hundred words. A few months later, I decided to edit it and make it longer. I posted it on another site. A few months after that, I decided to edit again. Finally, I decided to publish and it grew even more.

I still enjoy the original story (which was well over 500 words). It was complete on it’s own. However, I also enjoyed digging deeper into the conflict and the minor characters to create its final version. In “The Best Laid Plans” Darcy and Elizabeth mistakenly send letters to one another a few weeks after the Netherfield Ball. In Letters from the Heart, nearly every character’s life changes due to a letter. Interestingly enough, I just rewrote the blurb for Letters from the Heart. In it, I focus on the relationship between Darcy and Elizabeth.

Going back to the prompt of swapping Emma Woodhouse and Catherine Morland. While many things might and must change with such an alteration. Not a soul in either book would not be affected. Naturally, however, the greatest changes would center on the heroines and their love interests. That would be the central theme and what I would include in the blurb. The story, though, would contain all the nuanced changes for everyone else. How would Harriet change if Catherine were her friend instead of Emma? Isabella Thorpe probably doesn’t stand a chance on influencing Emma Woodhouse. Eleanor Tilney might take on a greater role instead. These are the things which a JAFF writer must consider when taking on a “wacky” prompt.

In Letters from the Heart, it is not just that Darcy and Elizabeth have accidentally sent letters. It’s that they both have confessed they love one another. How does the story change when Elizabeth realizes she loves Darcy early on? Well, I can assure you it’s not a smooth path to happily ever after!

What would inspire you to write a “wacky” story?

3 thoughts on “Wacky Wednesday– Mix up”