If you’re a reader of Jane Austen’s works, then you might notice a trend for the most talkative gentleman to be the villain of the story. Let us consider the books. In Sense and Sensibility, the man who enters into lively conversation is Mr. Willoughby. Wickham fills the role in Pride and Prejudice. Henry Crawford of Mansfield Park has superior powers of conversation–if Mary’s constant critique of Edmund’s scolding is any indication. While Frank Churchill is not truly a villain, he’s not the hero and Mr. Elton is downright slimey for all his ability at small talk. William Elliot has a conversation with Anne in Persuasion about what makes the best company and he ranks conversational abilities at the top of the list.

Honestly, it’s a let down. Can’t a girl have a decent conversation and he NOT be the jerk of a century?

What makes him so appealing is that he mocks those moments of small talk but still understands the rules of society. He pays homage to them without telling you how a poem has moved his soul or all about his three decade long feud with the current master of the estate he grew up at before he even knows your surname.

Contrary to the scene in the 2007 film, Catherine Morland was introduced to Mr. Tilney before they spoke. The master of ceremonies provided Tilney as a partner, in what seems very much like Sir William Lucas’ want of pairing everyone up. While they did not speak very much during dancing, they did when they sat for tea afterward. Originally, the spoke of such things relating to the ball when Henry seized upon the fact that he had not asked the “usual” sorts of questions new acquaintances ask in Bath. What follows, is a scene that makes my heart go pitter-patter.

Then forming his features into a set smile, and affectedly softening his voice, he added, with a simpering air, “Have you been long in Bath, madam?”

“About a week, sir,” replied Catherine, trying not to laugh.

“Why should you be surprised, sir?”

“Why, indeed!” said he, in his natural tone. “But some emotion must appear to be raised by your reply, and surprise is more easily assumed, and not less reasonable than any other. Now let us go on. Were you never here before, madam?”

“Indeed! Have you yet honoured the Upper Rooms?”

“Have you been to the theatre?”

And are you altogether pleased with Bath?”

“Now I must give one smirk, and then we may be rational again.” Catherine turned away her head, not knowing whether she might venture to laugh. “I see what you think of me,” said he gravely—”I shall make but a poor figure in your journal tomorrow.”

“Yes, I know exactly what you will say: Friday, went to the Lower Rooms; wore my sprigged muslin robe with blue trimmings—plain black shoes—appeared to much advantage; but was strangely harassed by a queer, half-witted man, who would make me dance with him, and distressed me by his nonsense.”

“Indeed I shall say no such thing.”

“Shall I tell you what you ought to say?”

“I danced with a very agreeable young man, introduced by Mr. King; had a great deal of conversation with him—seems a most extraordinary genius—hope I may know more of him. That, madam, is what I wish you to say.”

“But, perhaps, I keep no journal.”

From this conversation, they move into a world where Catherine is a bit naive and innocent. She does not catch all of Tilney’s jokes, but he also expresses his belief in equality between men and women. It’s a hint about their characters. Isabella Thorpe would have a very different sort of reaction to Henry’s words. Likewise, while Catherine believes the only threat to her brother’s engagement to Isabella to be Henry’s brother, the fact is that Isabella is the one who puts it in danger and is just as capable of doing so as a man. 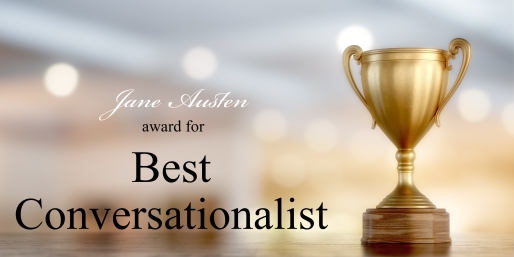 Henry Tilney wins the Jane Austen award of best conversationalist because he can be both flippant and serious in a short span. His words are lively and entertaining while not being entirely inappropriate. They are welcoming and engaging but do not become overly personal. He has no foul intentions with his conversation. He is not trying to make Catherine fall in love with him or make others believe that he is in love with her to hide his affection for another. He is not grouching in a corner and refusing to dance.

Yes, Henry Tilney can take me on a dinner date any day. I am sure we will have the very best conversation.